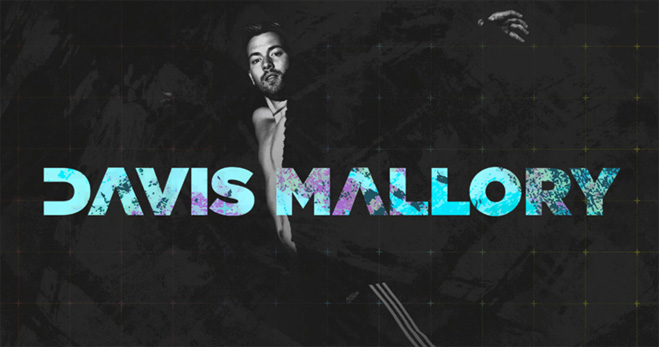 After appearing on the 18th installment of MTV’s The Real World (The Real World – Denver) and three iterations of MTV’s reality game show The Challenge, the singer-songwriter interned at the Windish Agency, later becoming a music columnist for LOGO TV, and moved to New York City to pursue music.
In his last behind-the-scenes role, Davis worked in A&R/Marketing at Capitol Records’ Astralwerks label home to David Guetta, Swedish House Mafia, and Kylie Minogue. Davis’ time promoting electronic dance music drove him towards performance, where he studied at Dubspot School of Electronic Music and began songwriting–top lining over beats from producers around the world. Already having an intriguing story to tell, Davis gave a TED Talk in 2013 on his path into the industry called: “Follow Your Dreams.”

2017 has been a landmark year thus far for Davis as he had his first songs as a creative signed to record labels: Landis’ “Loud (feat Davis Mallory)” dropped on Grammy-nominated French producer Cedric Gervais’ Delecta label and earned Davis a Spotlight Artist feature on the label’s website. This was followed by a collaboration with Swedish producer John Dahlback (who has worked with Lady Gaga, Swedish House Mafia, and Avicii) on a release titled “Anyone Would Know (feat Davis Mallory),” a cornerstone of Dahlback’s 2017 album on Armada Records. Most recently, YourEDM highlighted Davis’ collaboration with French duo Vorden: “Because Of Love,” and PopDust premiered Davis’ song, “BeWithout You,” a collaboration with Sean Myers (a producer who has collaborated with NERVO & Cheat Codes).